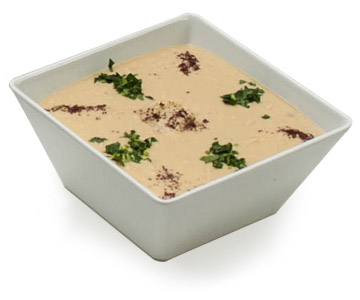 Some say the origins of hummus date back to the 11th century in Cairo. Others suggest it was closer to the first known recipes published in 13th century Egyptian cookbooks. One thing is for sure, hummus has been a Mediterranean staple for many centuries. And Mezza has made it a favorite of thousands of on-the-go Chicagoans that just won’t settle when making lunch choices.

From a base of fresh chickpeas (also known as garbanzo beans), our hummus combines the fresh olives oil, house-made tahina, fresh squeezed lemon and just the right amount of garlic. To name a few of the health-packed ingredients. The result is hummus that is not only delicious, but packed with enough vitamins and antioxidants to consistently land itself on lists of the healthiest foods in the world.

Another example of Mezza’s commitment to – Wholesome, Hearty and Healthy.

No menus were found.